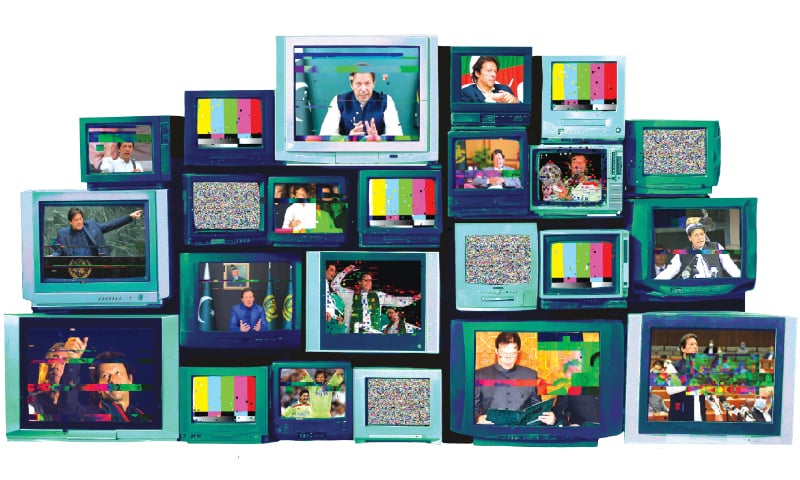 In the hugely controversial attempt at face-saving that triggered a constitutional crisis and the recent dizzying political developments, one man is at the center of it all. How has Imran Khan, the face of promised Tabdeeli, changed the game? And can we understand his enigma through his political journey?

Pakistan is full of traitors and only one leader stands tall amongst them like the Colossus of Rhodes. Only he can redeem us from conspiracies hatched in the capital of a superpower against the Colossus himself.

He may soon belong to the long list of Muslim martyrs, which includes the likes of Tipu Sultan and Siraj-ud-Daulah, who met a tragic end because of foreign conspirators and traitors within our ranks. Those who hailed him as a conquering hero — a mujahid — may soon cry for him as a tragic hero — a martyr — unless he stands up and defeats all conspirators. In that case, we must cheer for his invincibility.

This is how the nation’s master narrator, Imran Khan, has defined his premature exit from office. And millions of Pakistanis, constantly living in a mental state of siege, have agreed without any need for credible information. Narratives in the post-truth age don’t need much evidence anyway.

To define his premature exit on his own terms, Khan has kicked up a constitutional crisis, attracting blame for subverting democracy and the constitution.

As the conquering hero exits (at least for now), he is leaving behind nothing more than the debris of a ruthless battle. A battle fought by him against already vanquished enemies, only to ensure that they were unable to rise again. Yet, they came back with a vengeance and have been able to force him out of power.

Imran Khan is hardly leaving any legacy of reform in any sector, which he had vowed before coming into power. In fact, all three pillars of the state — the legislature, the judiciary, and the executive — have been diminished. What is worse, he is leaving behind multiple crises that his successors — and he may succeed himself — will have to grapple with for many years to come.

During his tenure, Pakistan has experienced Tabdeeli (change) but not in the way it was promised or hoped. Massive inflation, a by-product of his government’s economic mismanagement, has driven millions of Pakistanis into grinding poverty, forcing them to reduce even their basic consumption.

Since Khan portrayed himself as a crusader against corruption, the realization of most of his promises hinged on transparent governance. But, unfortunately, Pakistan’s ranking on Transparency International’s Corruption Perceptions Index fell constantly during his government. This year alone, Pakistan’s rank has fallen 16 places to 140 from 124, out of 180 countries.

How did Khan end up here? And how did he bring the nation to this juncture? Can his political journey provide some answers?

To understand Khan’s saga, let’s begin at the most glorious and eventful year of his life that, according to his own account, defines his life’s work. In 1992, Khan led Pakistan’s team to victory in the Cricket World Cup and turned 40 a few months later. By retiring from cricket that year, he turned the page on his athletic life that had turned him into a cult god. At the same time, he opened a new chapter in life that would take him to the pinnacle of power in Pakistan.